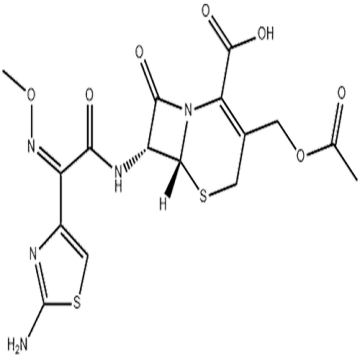 Description Like other third-generation cephalosporins, it has excellent anti-Gram-negative activity and is useful institutionally. It has a metabolically vulnerable acetoxy group attached to C-3 and loses approximately 90% of its activity when this is hydrolyzed. This metabolic feature also complicates the pharmacokinetic data, because both active forms are present and have different properties. Cefotaxime should be protected from heat and light and may color slightly without significant loss of potency. Like other third-generation cephalosporins, cefotaxime has less activity against staphylococci but has greater activity against Gram-negative organisms.

Uses Cefotaxime has a broad spectrum of antibicrobial use. It acts bactericidally. It is highly active with respect to Gram-negative microorganisms (E. coli, Citrobacter, Proteus mirabilis, P. indole, Providencia, Klebsiella, Serratia), and a few strains of Pseudomonas, H. influenzae that are resistant to other Antibiotics. Cefotaxime is less active with respect to streptococci, pneumococci, meningococci, gonococci, and bacteroides. It is resistant to the majority of beta-lacatamases of Gram-positive and Gram-negative microorganisms.

This drug is used for severe bacterial infections caused by microorganisms that are sensitive to the drug such as peritonitis, sepsis, abdominal infections, infections of the pelvis minor, infections of the lower respiratory tract, urinary tract, bones, joints, skin, soft tissues, and infected wounds and burns. Synonyms of this drug are claforan, zarivis, and others.

Manufacturing Process A solution of 8 g of sodium bicarbonate in about 20 ml of ethanol was progressively added to 45.55 g of pure 3-acetoxymethyl-7-[2-(2-amino-4- thiazolyl)-2-methoxyiminoacetamido]-ceph-3-eme-4-carboxylic acid in 100 ml of distilled water and another 80 ml of ethanol and 4.5 g of activated carbon were added thereto. The mixture was stirred for 5 minutes and was filtered. The filter was rinsed with ethanol and the filtrate was evaporated to dryness under reduced pressure. The residue was taken up in 100 ml of ethanol and evaporated to dryness again. The residue was dissolved in 100 ml of methanol and the solution was poured into 2 l of acetone. The mixture was vigorously stirred and was vacuum filtered. The recovered product was rinsed with acetone and then ether and dried under reduced pressure to obtain 43.7 g of a white product which rehydrated in air to obtain a final weight of 45.2 g of sodium 3-acetoxymethyl-7-[2-(2-amino-4-thiazolyl)-2- methoxyiminoacetamido]-ceph-3-eme-4-carboxylate.

Antimicrobial activity The aminothiazoyl and methoximino groups at the 7-amino position confer, respectively, potent activity against many Gram-negative rods and cocci and stability to most β-lactamases. Ps. aeruginosa, Sten. maltophilia and other pseudomonads are often resistant. Brucella melitensis and some strains of Nocardia asteroides are susceptible. Activity against L. monocytogenes and B. fragilis is poor.

Acquired resistance Many enterobacteria resistant to other b-lactam agents are susceptible, but selection of resistant strains with derepressed chromosomal molecular class C cephalosporinases may occur. Gram-negative bacilli producing variants of the TEM enzymes (pp. 230–231) are resistant.

It is widely distributed, achieving therapeutic concentrations in sputum, lung tissue, pleural fluid, peritoneal fluid, prostatic tissue and cortical bone. In patients receiving 2 g every 8 h, mean CSF concentrations in aseptic meningitis were 0.8 mg/L. Levels of 2–15 mg/L can be found in the CSF in the presence of inflammation after doses of 50 mg/kg by intravenous infusion over 30 min. A single intraventricular dose of 40 mg/kg produced levels at 2, 4 and 6 h of 6.4, 5.7 and 4.5 mg/L, respectively.

About 15–25% of a dose is metabolized by hepatic esterases to the desacetyl form, which may have some clinical importance because of its concentration in bile and accumulation in renal failure. Desacetylcefotaxime has about 10% of the activity of the parent against enterobacteria, less against Staph. aureus. Its half-life in normal subjects is around 1.5 h.

Elimination is predominantly by the renal route, more than half the dose being recovered in the urine over the first 24 h, about 25% as the desacetyl derivative. Excretion is depressed by probenecid and declines in renal failure with accumulation of the metabolite. In patients with creatinine clearances in the range 3–10 mL/min, the plasma half-life rose to 2.6 h while that of the metabolite rose to 10 h.

Side effects Minor hematological and dermatological side effects common to group 4 cephalosporins have been described. Superinfection with Ps. aeruginosa in the course of treatment has occurred. Occasional cases of pseudomembranous colitis have been reported.

Chemical Synthesis Cefotaxime, α-O-methyloxime acetate (6R, 7R)-7-[2-(2-amino-4-thiazolyl)- glyoxylamido]-3-(hydroxymethyl)-8-oxo-5-thia-1-azabicyclo[4.2.0]oct-2-en-2-carboxylic acid (32.1.2.56), is synthesized by acylating of 7-aminocephalosporanic acid with 2-(2-amino- 4-thiazolyl)-2-methoxyiminoacetic acid, which is protected at the amino group by a trityl protection (32.1.2.54). After removing the trityl protection from the resulting product (32.1.2.55) with dilute formic acid, the desired cefotaxime (32.1.2.56) is formed. The ethyl ester of 2-(2- amino-4-thiazolyl)-2-methoxyminoacetic acid necessary for this synthesis, as well as for the synthesis of a number of other antibiotics of the cephalosporin series, is synthesized from acetoacetic ester. Nitrosation of acetoacetic ester with nitrous acid gives isonitrosoacetoacetic ester (32.1.2.49). O-Methylation of the hydroxyl group of obtained product with dimethylsulfate in the presence of potassium carbonate gives ethyl 2-(methoxyimino)acetoacetate (32.1.2.50).

Brominating the resulting product with bromine in methylene chloride in the presence of p-toluenesulfonic acid gives 4-bromo-2-methoxyiminoacetoacetic ester (32.1.2.51). Reacting this with thiourea according to the classic scheme of preparing of thiazoles from α- bromocarbonyl compounds and thioamides gives the ethyl ester of 2-(2-amino-4-thiazolyl)-2- methoxyiminoacetic acid (32.1.2.52). Reacting this with triphenylchloromethane in the presence of triethylamine results in a trityl protection of the amino group, forming the ethyl ester of 2-(2-tritylamino-4-thiazolyl)-2-methoxyminoacetic acid (32.1.2.52), which is hydrolyzed to the acid (32.1.2.54) using sodium hydroxide. The resulting acid (32.1.2.54), as was already stated, is used for acylating of 7-aminocephalosporanide acid in the presence of dicyclohexylcarbodiimide, giving tritylated cefotaxime, α-O-methyloxime acetate 7-[2-(2- tritylamino)-4-thiazolyl-glycoxylamido]-3-(hydroxymethyl)-8-oxo-5-thia-1-azabicyclo [4.2.0]oct-2-en-2-carboxylic acid (32.1.2.55). Finally, removing the trityl protection from the synthesized product (32.1.2.55) using dilute formic acid gives cefotaxime (32.1.2.56).

Shandong Yunfenglian Chemical Co., Ltd. is a comprehensive modern high-tech enterprise integrating R&D, production and sales of fluorine-containing fine chemicals, new chemical materials, and APIs. The company focuses on the field of high-end fine chemicals. The core products are positioned in fluorine-containing fine chemicals, and the focus is on the development of fluorine-containing pharmaceutical/pesticide intermediates, new chemical materials, and APIs. The company attaches great importance to the research and development of new products and strict requirements on product quality. For a long time, the company`s products have been favored by customers at home and abroad for their stable quality and reasonable prices. We will continue to provide the best product quality and the most reasonable The product prices and the most enthusiastic service to meet your needs and create our reputation.